Preface to The Golden Notebook

Starts with talking about the reception and interpretations of her novel and includes, about half way, great notes about education and its wrongdoings.

“It starts when the child is as young as five or six, when he arrives at school. It starts with marks, rewards, ‘places’, ‘streams’, stars — and still in many places, stripes. This horserace mentality, the victor and loser way of thinking, leads to ‘Writer X is, is not, a few paces ahead of Writer Y. Writer Y has fallen behind. In his last book Writer Z has shown himself as better than Writer A.’ From the very beginning the child is trained to think in this way: always in terms of comparison, of success, and of failure. It is a weeding-out system: the weaker get discouraged and fall out; a system designed to produce a few winners who are always in competition with each other.”

“Ideally, what should be said to every child, repeatedly, throughout his or her school life is something like this : ‘you are in the process of being endoctrinated. We have not yet evolved a system of education that is not a system of indoctrination. We are sorry, but it is the best we can do. What you are being taught here is an amalgam of current prejudice and the choices of this particular culture. the slightest look at history will show how impermanent these must be. You are being taught by people who have been able to accomodate themselves to a regime of thought laid down by their predecessors. It is a self-perpetuating system. Those of you who are more robust and individual than others, will be encouraged to leave and find ways of educating yourself — educating your own judgement. Those that stay must remember, always and all the time, that they are being moulded and patterned to fit into the narrow and particular needs of this particular society.’” 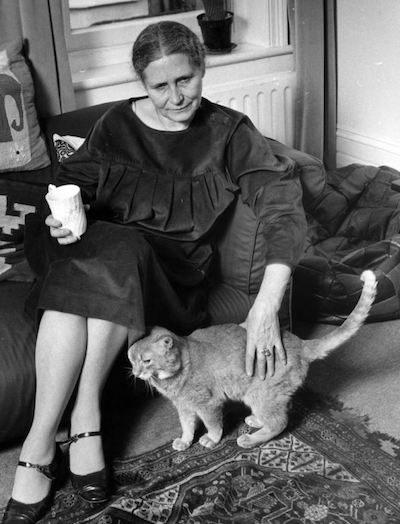 Where a young man or woman, reviewer or critic, who has not read more of a writer’s work than the book in front of him, will write patronizingly, or as if rather bored with the whole business, or as if considering how many marks to give an essay, about the writer in question — who might have written fifteen books, and have been writing for twenty or thirty years — giving the said writer instruction on what to write next, and how. No one thinks this is absurd, certainly not the young person, critic or reviewer, who has been taught to patronize and itemize everyone for years, from Shakespeare downwards.
Where a Professor of Archaeology can write of a South American tribe which has advanced knowledge of plants, and of medicine and of psychological methods: ‘The astonishing thing is that these people have no written language …’ And no one thinks him absurd.
Where, on the occasion of a centenary of Shelley, in the same week and in three different literary periodicals, three young men, of identical education, from our identical universities, can write critical pieces about Shelley, damning him with the faintest possible praise, and in identically the same tone, as if they were doing Shelley a great favour to mention him at all — and no one seems to think that such a thing can indicate that there is something seriously wrong with our literary system.
Finally … this novel continues to be, for its author, a most instructive experience. For instance. Ten years after I wrote it, I can get, in one week, three letters about it, from three intelligent, well-informed, concerned people, who have taken the trouble to sit down and write to me. One might be in Johannesburg, one in San Francisco, one in Budapest. And here I sit, in London, reading them, at the same time, or one after another — as always, grateful to the writers, and delighted that what I’ve written can stimulate, illuminate — or even annoy. But one letter is entirely about the sex war, about man’s inhumanity to woman, and woman’s inhumanity to man, and the writer has produced pages and pages all about nothing else, for she — but not always a she, can’t see anything else in the book.
The second is about politics, probably from an old Red like myself, and he or she writes many pages about politics, and never mentions any other theme.
These two letters used, when the book was as it were young, to be the most common.
The third letter, once rare but now catching up on the others, is written by a man or a woman who can see nothing in it but the theme of mental illness.
But it is the same book.
And naturally these incidents bring up again questions of what people see when they read a book, and why one person sees one pattern and nothing at all of another pattern, and how odd it is to have, as author, such a clear picture of a book, that is seen so very differently by its readers.
And from this kind of thought has emerged a new conclusion: which is that it is not only childish of a writer to want readers to see what he sees, to understand the shape and aim of a novel as he sees it — his wanting this means that he has not understood a most fundamental point. Which is that the book is alive and potent and fructifying and able to promote thought and discussion only when its plan and shape and intention are not understood, because that moment of seeing the shape and plan and intention is also the moment when there isn’t anything more to be got out of it.
And when a book’s pattern and the shape of its inner life is as plain to the reader as it is to the author — then perhaps it is time to throw the book aside, as having had its day, and start again on something new.